I took a small sabbatical to get my head together for my last grad school class but I just had to come back to talk about what has been happening on the streets of a city I know very, VERY well: Baltimore, Md. 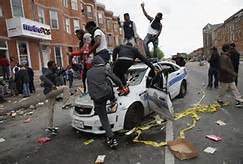 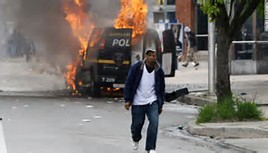 The burning of a police van during the Baltimore Riots

Even though I may dispute this later, I am tied to the city of Baltimore. I grew into adulthood upon my acceptance and matriculation into Morgan State University, located on the northeastern side of Baltimore City. I spent five years living in that city, between the ages of 18-23, until karma finally caught up to me for not paying my rent and I was subsequently evicted for lack of rent payment in 2007 (long story but the moral is: pay your damn rent!). Five years of living somewhere is a long time, and ultimately I learned every nook and cranny of that city like I know my hometown of Capitol Heights, which is located 30 miles away from Baltimore in Prince Georges County, Md. I learned to love, forgive, cry, party, laugh, and learn within the confines of those city limits. That’s why, when I turned on the television on April 27, it was hard to see the images of people rioting, looting, crying and protesting on North Avenue, basically the middle (and arguably most poverty-stricken) area of the city.

Let’s back up a few years to when I first packed up my things in late August of 2002 and embarked on my journey to the dorms of Morgan State. Before that day I had only ventured into the city as far as the Inner Harbor and I only went with my parents in tow. Nothing could prepare me for what I saw as I drove through the unknown and often unseen parts. It looked like an atom bomb had been dropped there and the explosion was still taking place. There were boarded-up houses everywhere, cemeteries as far as the eye could see, people who were undoubtedly on drugs walking through the streets like zombies. To say the least, my little 18-year-old still wet behind the ears ass was scared outta my wits. It was nothing I had ever seen before. Sure, there are crackheads and boarded up houses in DC, but not to that magnitude. After my parents helped me move my things into my dorm room and were getting ready to leave, they left me with some advice: “do NOT leave the campus.”

Anyone who knows me knows I rarely follow rules, so within a week I was across the street of the campus at the small strip mall called Northwood Plaza. I knew about the dangers of being off campus: there were reports of students being robbed at gunpoint by people who could spot someone who wasn’t a Baltimore native from a mile away. But I didn’t care. I was bored with the campus and ready to explore what was to be my surroundings for the next four years of my life. As the years went on, I gradually learned all the hot spots, where to go, where not to go, where you should never go. I learned of all the malls, clubs, shortcuts to get to the malls and clubs, I even secured a job or two and learned their bus system. It was like I became a native. But I still wasn’t comfortable with the city. I eventually moved back to PG County when I was evicted and never moved back, but I know strife when I see strife, and the residents of that city are living in strife.

I have seen oppression in that city; I tell people all the time that Baltimore was the first place I was called a nigger. It’s hard to believe because Baltimore is more than 50% black, but when my friends and I travelled to South Baltimore for a party a friend of ours from Morgan was throwing, White people in that neighborhood was very upset to see a bunch of young Black kids invading their space. Therefore, on that cold winter night, us six Black girls were verbally assaulted for the first time in all our lives. I guess that’s why it wasn’t hard to believe the Freddie Gray story or the first-hand account of the racist interaction downtown protesters had with White people by Camden Yards, with them being called niggers and the Whites who were protesting being called nigger lovers. 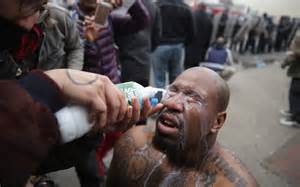 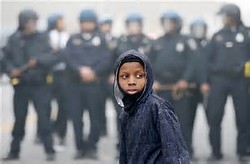 The children of Baltimore, forced to see the carnage and oppression

Now, I don’t condone violence in any way. I believe love and talking it out is always the answer; I am always called a modern hippie for that. But to understand Baltimore is to understand that these kids in these neighborhoods wanted to be heard. This is not the first time a situation like Freddie Gray has taken place in Baltimore (see this here).  The youth of Baltimore didn’t feel like they had another way to be heard. Yes, there were people rioting who were just taking advantage of the situation, but many of them were not. They were angry. And I am angry that it took the carnage and destruction of one part of the city for them to finally be heard.

When the curfew was announced, many people protested that as well; they are adults, they cried. Why were they being treated like common criminals and being told to be home by 10 pm or else? Why was there heavy police presence in North and West Baltimore but White areas like downtown, South Baltimore and Charles Village were met with barely any curfew enforcement?

There are so many more questions that we as a people will probably never get answered, but now is the time for unity and peace. There was relief, satisfaction and praise when those six in connection with Gray’s death were charged and issued arrest warrants. But this also shows how jaded we as a people are. We are not celebrating a conviction but rather just an arrest of those responsible. Let’s build and rebuild together as a people, let’s show Baltimore and the rest of the nation that we are not dumb, mindless thugs and animals.

Please believe me when I say Baltimore, I stand behind you and believe in you!